Who doesn’t love a beautifully embossed Rose Gold Planner? Obviously, not me because I accidentally bought an extra one just for you! 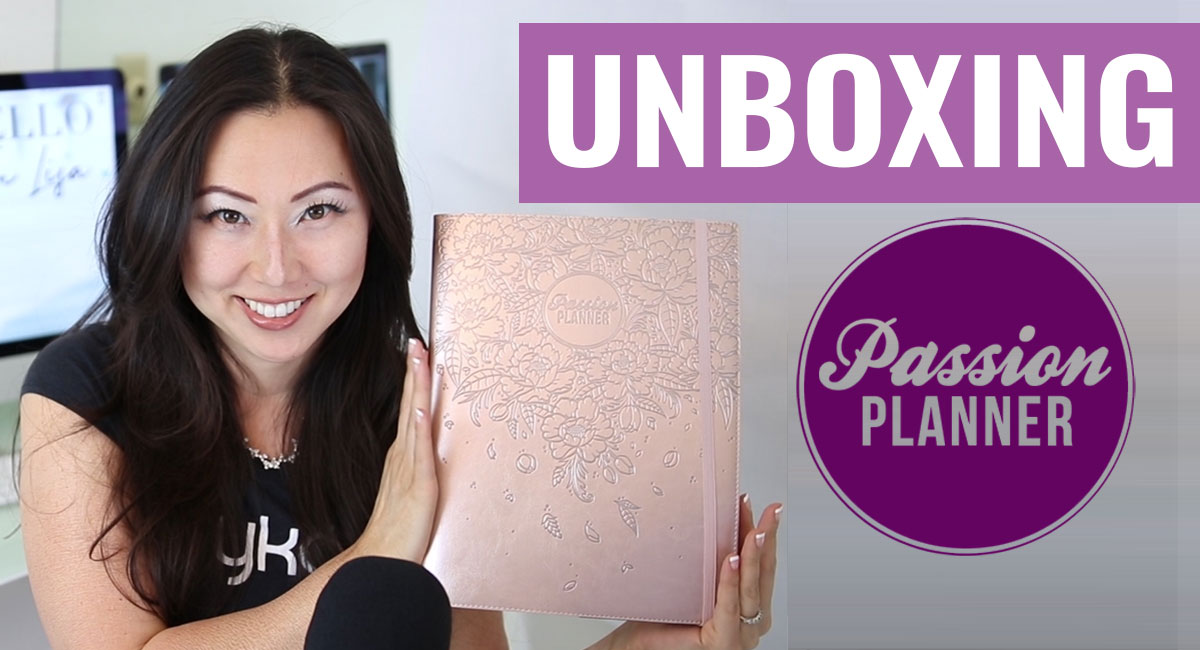 Also this is a Limited Edition planner, Passion Planner will not be restocking it so this is the last one!

And the BEST PART –>> You can re-use the beautifully embossed Rose Gold cover with a built-in elastic strap for 2018 and beyond. The current 2018 Planner can be easily removed & replaced with ANY A4 sized planner.

I’ll show what it came in – the packaging – do a complete flip-through of all the pages, talk about pricing and who this planner is best for.

00:00                                         Today we’re going to be doing a review and unboxing of the passion planner and I have two of them and these are the data 2018 planners and we’re going to go through whether or not I think they’re worth it for what you get. Hi everyone. I’m Lisa from pretty fabulous and I have online businesses create beautiful digital downloads using adobe indesign. So if this sounds like you are something you might be interested in mixture to. Hit the subscribe button below. I post new videos every Monday and Thursday and I do unboxings like today on Saturdays. Now this is the 2018 at classic or rose gold passion planner. It is. The large side is is eight point two seven by 11 point six, nine inches. So it’s pretty hefty in size and in wait. Now this is their limited edition in terms of the color, which means it will not be restocked and it is currently sold out and I was lucky enough to score this for $10 and it’s normally 35, but I suspect they’ll have planners that look just like this but maybe won’t be a.

01:04                                         won’t have this design on them. $10 sounds like a deal except shipping was $8 and taxes were another $2. So this did end up costing almost $20. I believe I received this one for $10 because they had a pop-up sale on instagram and I saw that in, went to their site and as far as packaging, it arrived in just a paper flat rate, a u, s, p, s envelope with nothing else in it. There was no invoice or any sort of packaging. This one normally retails for [inaudible] at right now on their website. They are discounting all dated planners by $10. And I forgot to mention there were two stickers inside of their, uh, be happy sticker and a passion planner sticker that came with this particular planner. This one did not come with any stickers. Now this is the rose gold planner that is no longer available.

02:43                                         And another piece of, I shouldn’t say glue tape, um, on the, around the spine now inherent, these were discontinued. And the recent these were discontinued is because what you see here, uh, this is, I believe it’s like a pleather, but the actual planners don’t fit inside properly. So sometimes the covers would be a little bumpy. And that’s because these actually kind of slide in and let me try to slide it out so I can show you. So in theory, you could just keep this cover from year to year and then take this black planner which looks exactly like this planner and swap it out when 2018 is done and replace it with a new planner and still have your pretty cover now. Most covers, I don’t think last that long, so I don’t know why you would do that, but I guess you know, it kind of is following the Franklin Covey model where you keep the outside and then the inside, uh, you can change from year to year or if you want to add different pages for a few, change your mind and you say, Oh, I want this to hold my wedding planner or something like that.

03:49                                         So let’s just go through this page by page so you can see exactly what’s in here. Um, they have this, give one get one, give one. When I first saw that, I was like, oh, I’m going to get two players for the price of one, but you’re not going to get to planners. They’re just simply suggesting that you give a planner away. I’m there. You can put your name, your email, a reward a, this is copyright by and Julia Trinidad, who I believe is the CEO. I did contact them to see if I could do an interview and Juliet Trinidad is on Sabbatical for the next year, so it’ll be interesting to see what kind of planner she comes out with between now and 2019 if she’s on sabbatical. Um, but I believe her social media graphic design are still running obviously because I saw this planner on instagram for $10 and that’s how I bought it.

04:40                                         Uh, so how will you benefit from your passion planner? And over here they talk about a fresh start. She has a little welcome section and some social media icons. She talks about your passion roadmap and then she talks about creating your plan, adding specifics. Um, so basically just doing some goal setting. This talks about how the planners set up and all of the great things on why you should plan and then they have a small little sort of weekly layout example over here. Again, everything in these planters is black and white, so there’s absolutely nothing in color. A, she has [inaudible] and 19 and then she has holidays as well as some space for you to write and whenever she gives you space to write, she calls it the space of infinite possibilities, which I liked. It’s very positive and we go right into January and I’m just going to show you January because all of the months basically followed the same format.

06:38                                         That’s right. It changes from week to week. Same thing again, here’s your to do list top priorities, priority and errands. Um, so kind of your ABC list, these are work related things. And then again, some blank space for you to, to write. Um, so each week follows that exact same format. And when you get to the end of the month over here, she has a two page spread on weekly reflection. And here she’s asking what was the most memorable part of this past month? Describe it. What were the three biggest lessons you’ve learned in this past month review planner for the past month and assess your priorities? Are you happy with how you spend your time? If not, what steps can you take next month to adjust them? Over here on the right, how are you different between this past month and the month before? What or who are you especially great for for this past month named three things you can improve on this upcoming month?

08:25                                         What is one way to incorporate these lessons into your life? Review your planner for the past year and assess your priorities. Are you having to how you spend your time? If not, what steps can you take next year to adjust them? How are you different between this year and the last? Who or what or who are especially grateful for this past year? It named three things you can improve on next year. What are concrete actions you can take to work towards these improvements? So these questions pretty much mimic the questions that you’ve already answered for the month. Um, and then she gives you some blank pages and I’m going to say these are about one, two, three.

09:01                                         So that’s about 10, 10 blank pages. And then she gives you about 10 pages with grid lines on them. And then we have designed in California, printed in China and overhear seal of approval, hand inspected by somebody. I’m in San Diego, passion planner, promise. And this is probably why this came so quickly. I’m located here in San Diego. I was going to say this, this got to my house probably a few days after I ordered it even though it was us mail. And that is it. So overall I think if you like putting a lots of color in your planner, you’re going to like this one because it’s black and white. So it doesn’t really seem very intrusive. I would say this planner is actually very masculine to me. So if you’re a man, obviously it’s all black. I put that sticker on there. It has a green bookmark even.

10:38                                         There’s just not enough white space in this planner to get my stuff down, but that’s probably just me. This was definitely worth the $10. I don’t know if I would’ve paid full price plus the shipping because that would’ve been another time. So that would have been $45 for this planner. Comment below and let me know. Do you prefer a black and white planner or do you or do you prefer the more colorful layouts? And as I said, their CEO is on sabbatical for a year so it’ll be interesting to see if their designs and patterns for next year are exactly the same. Or if she comes back to you change those. Alright, I will see you guys next week. Bye.